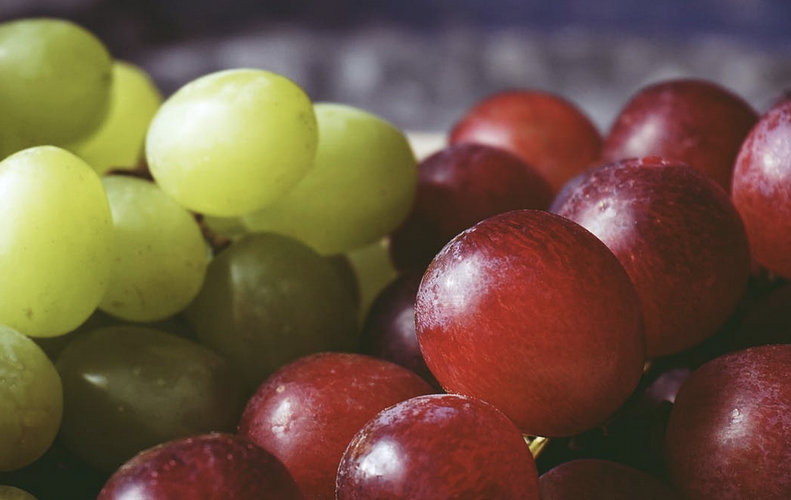 Persistence: A Story About Grapes

A couple of times a year, my girlfriend and I try to make it out to Cyprus. We love the blue seas, white sands and Mediterranean food. We may over-indulge in Greek Mezes and vodka fuelled drinks. We may also sometimes be found in the beach bar in the south of the island which has Caribbean inspired wooden furniture, a wonderful array of uses for sea shells, a delicious view of the sea and a peaceful, relaxing feel throughout.

It was here that we first encountered the grape man..

One afternoon whilst slowly turning pink in the afternoon sun, like a hog roast (but much less tasty) .. the peace and tranquility was broken by the piercing sound of a small engined moped pulling up near the entrance. Straddled on the seat,

which was mainly held together by duct tape, was an old man, we would estimate in his seventies.. but that look in his eyes – was surely as young as our own look .. which was displaying a copious amount of bemused bewilderment by this point.

The old man slowly climbed off his sun-decaying transport and looked around.. surveying the afternoon opportunities laid out before him. He then pulled out some bags from the basket that had been roughly attached with elastic, somewhere near his handlebars.

Inside the bags, it transpired, were bunches of grapes. The bags themselves were coarse, dusty bags that you might find at the supermarket, or wrapping your frozen chicken in your kitchen at home.. they were not, by anyone’s standards, appropriate packaging for an afternoon of opportunistic, interruption marketing.

By now, the old man was making his way, slowly, towards the tourists and their iced cocktails. A look of realisation fell across a few faces – as Brits, we don’t really enjoy being disturbed, or being placed in the uncomfortable situation of having to say ‘no’ – but it was obvious by now, that these grapes were for sale – and no-one was particularly in the mood to be sold to.

The first victims were in sight, the old man making a bee-line for a middle aged couple, slightly whiter than the rest of the sun seekers – perhaps indicating a recent arrival to the island. The man straightened slightly, preparing himself for the intrusion. The grape man descended with a bag of grapes, and thrust them at the couple whilst announcing, completely unnecessarily, “Grapes!”.
The man, shook his head and waved his hand, the grape man, looking crest-fallen, moved on.

The second prospects on the list were a family of four, Mother and Father, and two girls, most likely in their teens. Similarly, they had a bag offered to them, and similarly they said ‘No’. But this time, the grape man, unshaken, reached into one of his bags, removed a grape and offered it to the Mother, who, perhaps out of politeness, took the grape and ate it, but the father stepped in, more firmly this time, and ushered the dishevelled grape man away.

Similar engagements happened again and again, with not a single person choosing to purchase some grapes. No-one felt they needed nourishment, the nearby bar had plenty of food available, and the punch was full of fruit – it was no real wonder that the grape man was having zero success.

But then, a turning point! The grape man closed in on a couple of women, probably mid-forties, who perhaps took sympathy on him and purchased a bag of grapes for 3 euros. It was unclear if they were going to eat them or whether it was a charitable donation but by the end of the transaction there was a bag of grapes on the end of their sun lounger.. slowly baking in the sun.

Spurred on by his success, with the euros jingling in his lose pockets, the grape man continued on his sales-journey and managed to close his grape-deal with 3 of his next 4 targets.

But where were we whilst this was happening? We were higher up on a slight hill, a perfect vantage point to watch what was unfolding before us and what happened next was quite an impressive change-up.

The grape man by now, had run out of prospects.. he had spoken to everyone he could, and even with his run of good fortune, had maybe sold grapes to just 10-15% of them. Not a bad strike rate for cold-call marketing .. but the grape man didn’t seem satisfied, so he made a bold move..

The whiter middle-aged couple had perhaps only just settled down from their earlier encounter when the grape man descended for a second time. Emboldened by his recent success and with a more-confident look on this face, he pulled out a lone grape and offered it to the woman .. she took it, then promptly purchased the rest of the bag.

The second group, also had a repeat visit.. and again, this time felt more generous (or hungry) and purchased 3 bags (they didn’t have anything smaller than a 10 euro note, and, despite his recent cash purchases, the grape man didn’t have any change)

From our vantage point, it was a wonder to watch these customers change their minds and pay for ill-packaged, hot grapes. Perhaps it was the security of seeing their peers purchase or at least sample the grapes. Perhaps it was the friendly, sun-ripened face of the grape man, his smile lines cracking in the sun that in the end swayed them to make a purchase, who knows? But by the end of his second session, all but two of the groups on the beach had at least one bag of grapes by their side.

It would have been easy for the grape man to give up. He spoke very little english and it was very clear that his tactics, at least initially, were an inconvenience. He failed a number of times before having any success at all .. but he persisted. He offered free samples (pinched from the bag of the next customer) and slowly turned these strangers into customers.

It was inspiring. Not a single customer felt conned or intruded upon by the end. A few even chose to have a photo taken with the persistent sun-cracked purveyor of grapes. Most were smiling, most were munching on grapes ..all but a few had less money than when they initially laid down.

The grape man could have given up, negativity could have gotten the best of him. His brain could have convinced him that this group of people were a lost cause .. or perhaps that no-one likes grapes any more. But he pushed on, and he went back to the people who said no before .. he retargeted them with his grapes with noticeably more success.

Take a leaf out of the grape mans book, be persistent. Don’t give up – if you’re confident in what you’re selling or what you’re thinking – follow through with that confidence. Don’t be afraid to try to sell to prospects who had already said no – think of a new angle, like the grape man may have done with his mischievous, elderly grin – “those guys loved their grapes, are you SURE I can’t convince you?” .. or “Due to recent success, I only have a few bags of grapes left – don’t miss out!” .. but be bold, be brave – be confident in what you have to offer.. Be like the grape man .. and you’ll go far.

(Make Money and) Stand Out From The Crowd

A Note on Happiness